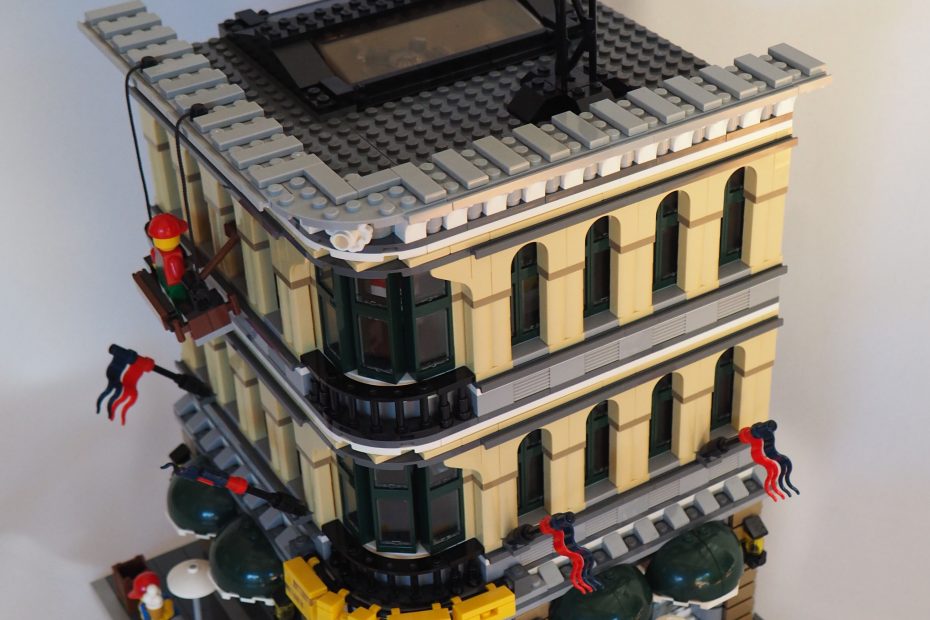 LEGO Ideas and the Creator Expert Modulars are two of my favourite LEGO themes. Over time I’ve been working on building up our collection and when the Grand Emporium came up on the Perth LUG Facebook page, I jumped at the chance to grab it. Sure, I had to take a second job and work overtime to pay for it, but I prefer not to think about that.

Initially released in 2010 we were keen to see how the build experience fared in comparison to newer sets. With 2182 pieces it should be a decent build.

Like most modulars, we start with the ground floor. It makes sense I suppose as building the second storey on air could be challenging.

The base level starts with the footpath and an detailed entryway tiling design into the emporium. On the sidewalk is a little icecream vending kart and a post box.

The flower pots at the front door are a nice touch and use an interesting technique for the base of the plant. A small black disc is inserted into the pot and rotated into place to provide the frame, a technique I’ve not seen elsewhere. The door itself rotates freely and is fun to play with.

The first floor is a fairly sparse shop floor with a few sets of pants on display, a couple of top hats and perfumes. There is a little cash register on the counter as well. From the looks of the various components in the shop it appears that the ground floor is where you would go to get fitted for your wedding. Two areas were especially cool to us. The Mannequins in the window with normal heads turned backwards, and the fitting room with a minifig trying on some parts behind the curtain.

To move up to the second floor, an elevator is provided. It’s only a single elevator, so we assume once you enter the Grand Emporium you never want to leave!
On the second level, there is even less than the first level but at least you can get your wedding gift registry filled with nice plates and glassware. The escalators continue on this floor and the perimeter railing looks great to open up the floors. The escalators are really great and have handrails included to help the minifigs move around safely.

The perimeter of the building uses a really nice double stacked approach with double stacked glass windows as the first inner layer. The Outer layer is a combo of archways and 1 x 2 log palisade pieces. The green windows look fantastic and represent an old majestic building perfectly. There are also a few flags surrounding this level to add some flair to the perimeter.

The third floor is where all the fun really starts as it’s the Toy level. There’s a couple of bowling balls, a scooter and a bird house. The Scooter build is nice and would surely be tempting to take off the stand and see if you can scoot down the elevator. It would have been nice to see some meta in the toy store with a few Lego sets for sale. There’s also a nice chandelier hanging above the escalators which adds prestige to the Emporium.

On the outside of this level is a window cleaner hanging from the rooftop. It’s one of our favourite parts of the set and really adds some character. The build technique is replicated for this level with the same arches and green windows. We’ve no complaints as it looks great.

For the rooftop, there is a removable skylight and a large sign advertising the store. The sign was quite fun to build and well constructed with different elements used to provide depth. It looks good and would look even better at night when lit up by the lights at the bottom.
The border of the rooftop is also nicely built and follows a similar architectural style with a small overhang.

This was a great build and a pretty good modular set. Our main criticism is the single elevator. The set appears to have been built with support for two elevators on each floor based on the cutout. It would have been nice to have the parts included for the second one as well. It also would have been good to have a little more internal elements on each floor. However, in fairness, this is a high end boutique, not Kmart so perhaps it’s fine. Oscar joked it should have been called the Emporium rather than the Grand Emporium.

If this was still available, we’d highly recommend all LEGO fans grab a set. Given it’s long term retired state though it’s a difficult set to get hold of. If you do have a LEGO modular city and you love the modulars, it’s worth saving up or building your own version with similar parts using the online instructions. Highly recommended.