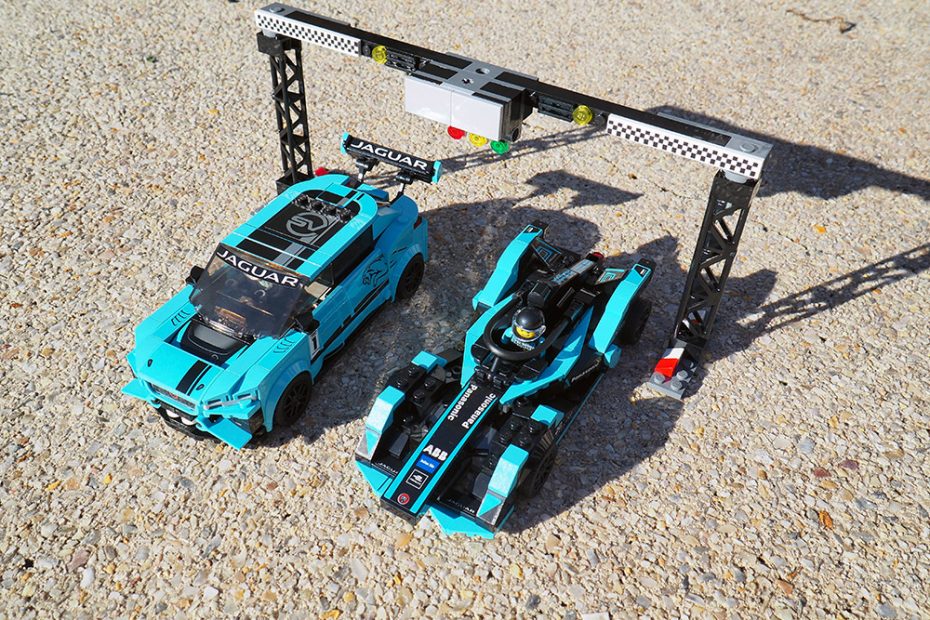 This set takes the award for longest set title with it’s official name – Formula E Panasonic Jaguar Racing GEN2 car & Jaguar I-PACE eTROPHY. I’m a huge fan of Formula 1 – (Go Dan Ricciardo) so when I saw this set I was keen to get building.

Although it’s not Formula 1, but the e-racing series, the open cockpit chassis lends the car a similar vibe.

Due to the narrow body of the Formula E car, this vehicle moves away from the 8 brick moulded chassis and returns to an older style modular setup. Building the front wing was quite fun with some underwing aero included. It would have been nice to see some smooth plates under the chassis to replicate the smooth carbon fibre look.

The use of the Black Bar 1L round plate for the front suspension mirrors the suspension of the real car well. I also got a kick out of the rear electric harvesting light and the inclusion of the protective halo. In F1 there was a lot of debate when it was first introduced, but now it’s hard to imagine the cars without them.

The Jaguar I-Pace car returns to the now common 8 stud chassis. It’s quite a quick build with not too many stand out features until we get to the front bumper. The jaguar grill and use of the Azure flags make it look really aggressive. I definitely get a kick out of it.

The car itself it a little too blocky at the rear compared to it’s real life counterpart in my opinion. Perhaps due to the limited size it would have been challenging to add sloped rear quarter panels and still retain the rear skirts and lights.

It’s also great to see a female minifig as the driver of this car. More and more the LEGO diversity is being shown in the models. It’s a shame that there is not a female racing driver in the real life team. But many series are starting to move this way, so it’s only a matter of time.

The final part of the build was the piece I thought would be the most boring. However I was really suprised. The staging lights have a great little mechanism that allows you to pull out the rod slowly to move from no lights, to red, orange then green. It’s actually really neat and quite fun to play with.

Another great LEGO Speed Champions set. The Formula E car is dead on and awesome fun to swoosh around. The I-PACE by itself looks like a solid little car, however it’s a little dissappointing if you compare it to the real life example. It’s around 25% too blocky compared to the relatively swooping lines of the original. However, this is forgiven with the staging light setup which is fantastic fun to play with. Overall, this is another solid set to buy if you’re into the Speed Champions theme.