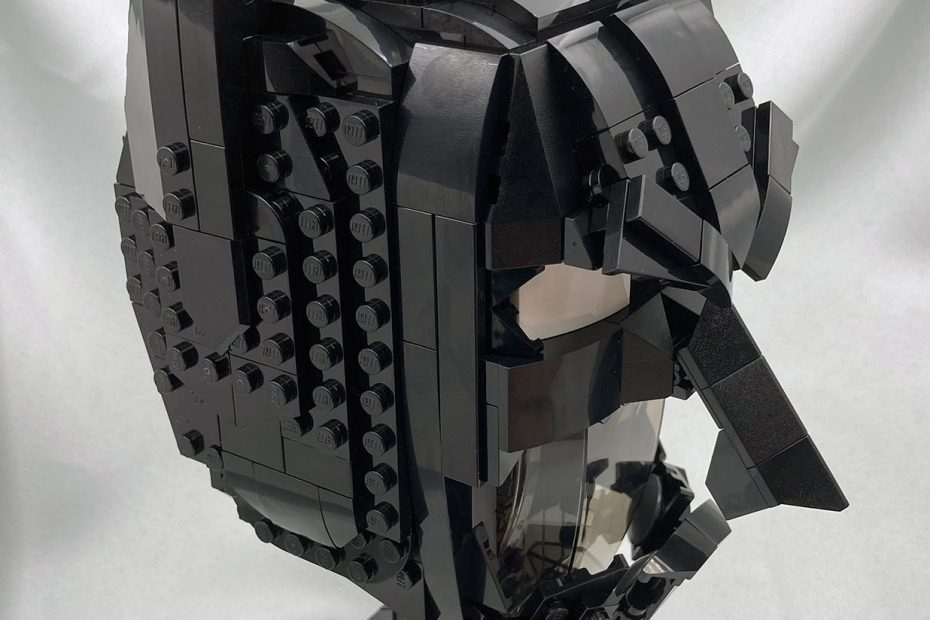 Batman has to be one of the coolest super heroes as he’s not really a super hero at all. He doesn’t have any special powers, but just a metric tonne of cash. So secretly we all can imagine that one day, we too, could be an avenger of the night!

LEGO have released quite a few headpieces (or cowls) now but we’ve not bought one prior to this set. We’ve certainly been tempted many times with the Star Wars helmets like Darth Vadar and Boba Fett’s helmets. They would be great on display as a collectors item, but running out of space to display them is a big challenge in our house. Nevertheless, we bought this set to give the series a try. The build starts with constructing the underlying stand for the cowl. It was quite a simple component to build with mostly LEGO bricks and a couple of technic pieces to create light weight stability.

We then moved on to creating the sub-structure of the head. Fortunately as most of this is hidden, LEGO designed the set with a variety of colours. This is likely to ease the build process, but it also adds some variation into the build. Otherwise, it would be almost completely black bricks. Great for fighting bad guys in the dark of night, but quite boring as a LEGO build. There’s a tonne of SNOT pieces in this build, so if you ever break it down, these will be useful for your future MOCs.

Once the sub-structure is completed, the build moves onto the rear of the cowl and the ears. This is a relatively simple process and as noted above, all black due to the visibility of these elements. I shouldn’t really complain too much as what can one expect. However, building with all black can get a little tedious.

The shape of the ears seems a little off to me. When compared to the ears in other models, the inner curve is perhaps too much. The image on the left shows that traditionally it’s quite straight with the curve occuring on the outer part of the ear. To me it feels like the outer element and inner element of the ear should have been swapped around.

We then repeat the process on the other side, because what self respecting super hero would have only one ear? Well, perhaps deadpool for a short period, but surely not a billionaire crime fighter.

The final part of the build is adding the front of the mask to the sub-structure. I’m not too sure about the lower portion of the mask as whilst it looks quite menacing it doesn’t really look like Batman. THe nose piece was quite narrow and not really reflective of the actual Batman mask. Similarly for the masks I’ve seen, the lower half of his mask is always open rather than having a protective shield and chin strap.

I think the finished model looks closer to either some form of rat (Ratman?) or Black Panther.

While writing this article, I came across a new LEGO Batman cowl that I think is a big improvement. Pariticularly when you look at the mask compared to the real thing, this coming soon model is a lot closer to reality for me. It’s coming out on the 1st October and would be the one I’d buy if you are a Batman fan.

It’s also a little more colourful which will improve the build experience.

I have mixed feelings on this set. I really wanted it to be great but there are few areas that let the set down. Perhaps the biggest frustration is the four small triangle pieces on the base. Throughout the build these popped off at least 10 times. This led me to scurrying after them as they slid across the wood floor. From what I can see it looks like they’ve been removed from the newer Batman cowl. It’s great to see LEGO updating sets based upon feedback (I assume).

If you are a huge fan of Batman this set would look good on your shelf. The same goes for those of you building up a LEGO bust collection. It would be a great addition.

However if you’re neither of these, I’d have a little trouble recommending this set based on the issues above and relatively low build enjoyment.