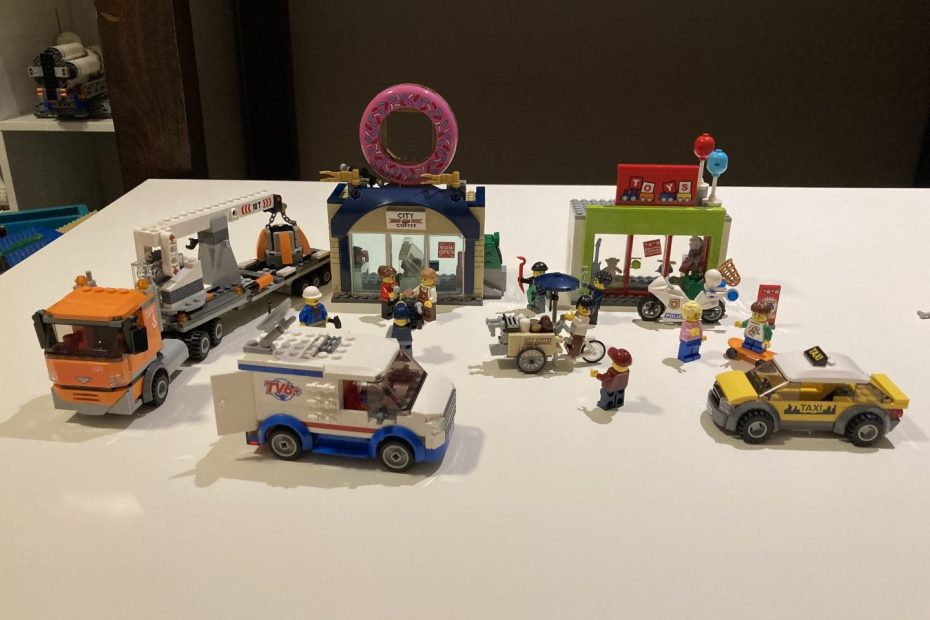 This is my first post/review I have ever written on this blog so I hope you enjoy it.

This set was a new one that I had never opened before so it was already exciting to open it. I have loved city sets for a long time and I hoped this one would be just as good as all the others.

When I first opened it, I saw that there were numbered packs, thank God.

(I’m getting flashbacks of building the Lego Death Star. So many pieces…. No packets….)

I started building the first packet which was a taxi and Duke Detain’s motorbike. I really liked the taxi because unlike many Lego vehicles it could actually fit 2 minifigs. This is a problem with Lego cars that I don’t like, so I was happy that 2 minifigs could fit inside.

The motorbike was just like your average Lego City motorbike but the cool thing about it was that it could stand up and not fall over. Some Lego motorbikes can’t do this, and it annoys me so much so it was good this one could stand up.

The next pack was the news channel truck. This one was probably my favourite vehicle in the set as so many details and functions were crammed into such a small space. It came with a news reporter and a cameraman, and they could both fit into the truck as well! The back of the truck opened up into a space with broadcasting controls and there was a hatch on the top as well as a moving satellite dish.

After the truck the 3rd packet moved onto the first building, a toy store! This was a nice build and came with 4 tiny but detailed minifig sized toys, a guitar, a teddy bear, a train and a propeller hat. The toy store had 4 big windows at the front that displayed the toys and a giant sign that said toys.

The next packet was the coffee bicycle (well it was technically a tricycle) and a bit of the coffee store. The tricycle was really interesting because it had an unusual piece I had never seen before.

You had to put a wheel on the weird piece, build the coffee cart, then stick the front of the piece to the cart with some clips. Even though it was an interesting technique, it worked out really well. The other half of the pack was some of the coffee shop

The next pack finished the coffee shop and it looked really good. It had a very large piece as the front of the store which I think is a technic car fender. On the side of the store there was a little ATM you could put money inside. I liked this because it gave a sense of meaning to having the crook and Duke Detain in the set.

After this I moved onto the last 2 packets, these were for the crane truck. The truck turned out to be orange which I think is a good colour. It makes me think of construction sites and machines. The front was super big and tough though, it looked like it was a monster truck!

The mechanism on the back of the truck for the crane was cool too, you could turn a knob and the beam went up and down. You could also extend the beam and turn the crane in different directions. The truck even had stabilisers that could be tucked into the trailer. These little details definitely added to the truck’s swooshability. The donut was also built in this pack and was really nice. Even the technical parts were a specific colour so they looked like the baked part of the donut.

Overall, this was an amazing set and what I hoped for. It had lots of play functions (the donut could even be launched off the roof of the coffee shop!)

I hope you enjoyed my first review!