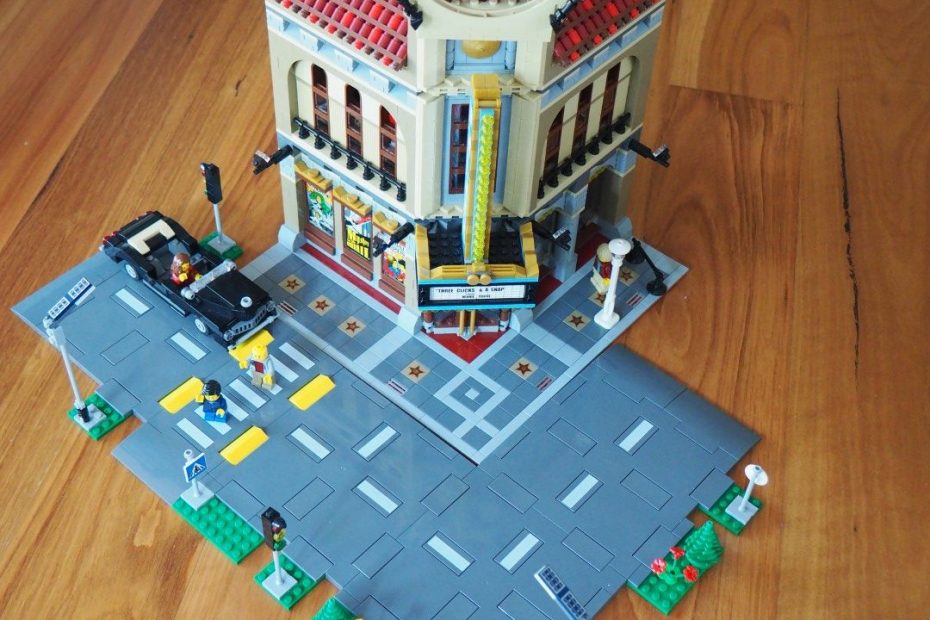 Today we look at the new LEGO City Road Plates. These replace the older base plates with a newer modular approach. It’s quite a small set and almost entirely based around the functional aspects of the road. Given the set is almost entirely road plates, I giggled at the splash on the box noting that road plates are included. We picked up the set to see if it would add some flair to our modular city. Let’s see it goes.

The first part of the build is building a couple of street lights. They’re quite basic but in a nice touch the 1 x 2 plate glows in the dark. It’s a nifty piece but doesn’t really add enough light to be useful. For some real light for your cities, you’re better to run aftermarket lights, such as the Light My Bricks range found at I’m Rick James Bricks.

The light up element is new for 2021. Each streetlight is also solar powered with a small solar PV array printed on the rear of the light.

The next part of the build is the traffic lights. Again there are two traffic lights in the set. Each little component built has a 2 x 4 plate attached so that it can be attached to the road plate later in the build.

We then move onto making a small landscape module with a tree and a flower. Growing up I remember the old fashioned basic flowers and in this set the flowers are a lot more detailed but also mounted on a leaf to add some foliage at the bottom. Red and yellow flowers are both used. The next little section is creating safety signage and two signs are included in the pack. A person crossing the road (also new for 2021) and a 50km limit sign. Interestingly it appears that the 50 limit is global so in the US it’s 50 mph (80kmh). Pretty fast for a zebra crossing! It’s a little surprising LEGO didn’t modify this for several global reasons.

We then move onto the main road plates. These are also new for 2021 as is the road plate section with the cross walk. All of these pieces have been built with flexibility in mind. Both the vertical and horizontal planes are mirrored so the plates can be built in any manner you wish. In the instructions, a T junction is displayed, however for our build we wanted a straight road. This change was very easy to make due to the modularity.

For the crosswalk section itself, we’re provided with 4 yellow slopes that act as speed bumps. In the middle of each road new 2 x 4 plates with a stripe are used to seperate the lanes of the road. The last new piece is a sloped piece that allows the vehicles to go from the ground plane to the road surface. Again, these can be added to any edge of the road.

We finally wrap up the build by connecting all components together and then filling in any “empty” asphalt with 1 x 4 grey plates. The instructions also show a few different variants including straight road, a right angle as shown here and the normal intersection.

As noted earlier, it’s a pretty simple set, but looks quite effective. The real test for us was how it looks with the Modular cities.

As can be seen below, it looks great. With a full city and a few more sets you could really build a complex roadway throughout. On the downside, the road plates are not quite the same height as the baseplates that the modulars sit on. It’s a couple of mm difference and depending on your level of OCD it will either bug you or it won’t. For us, it’s not too much of a concern.

The other minor issue is the lack of curved corners. Naturally with the system being entirely right angle based, the corners are as well. Some of the smaller vehicles will be able to make the corner, but for larger ones like the stretched limo here, we couldn’t. However this was easily solved imagining that we handbrake drifted around each corner.

I wasn’t sure how this set would go when we first saw it in the shops. However, I think it’s an upgrade from the old baseplates due to the scalability and diversity of builds you can make. At a retail price of $32.99 it’s going to add up quickly if you want to build a decent sized road layout. But these are bound to go on sale regularly and when they do, they will be a great addition to any cityscape. The rating below reflects the utility of the set more so than it’s quality. It’s something great to build upon, but has limited fun in and of itself.