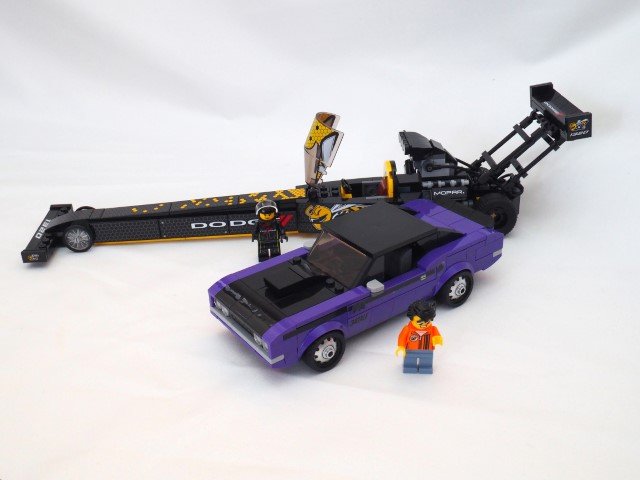 Continuing my love affair for the Speed Champions sets, we picked up the and 1970 Dodge Challenger T/A set. Over the years, I’ve been to the drag races, including with my own car and burning through a $2k clutch. Ah, the days when I was younger with a “still maturing” brain.

I’ve never been to a Top Fuel drag race though so the set didn’t immediately appeal to me (other than the general appeal of any cars). After getting the set I googled what it’s all about and WOW! 10,000 horsepower and 0-100kmh in less than a second!

Like most Speed Champion sets, we start the build with the minifig and this minifig appears based on a real driver – Leah Pruett! The printed torso and legs look fantastic too with full race suit imagery.

We then get started on the nose cone of the Dragster and if you like SNOT pieces, you’re in luck. It’s SNOTapalooza here with many SNOT pieces used to create the length of the nose cone while providing support for the bodywork. Once the bodywork is on, it’s time to sticker up the dragster. I’m not a fan of stickers, but in this case, I’ll make an exception. Everyone knows that racing anything with a motor is ultra expensive, so sponsorship is par for the course.

We then continue to build the front wing along with aero parts on the underside. You can see the aero in yellow in the image. The use of bicycle wheels is also great as it really represents just how skinny the front tyres on these cars are.

Once the nose cone is complete, we start on the cockpit. It’s a simple single seater with re-inforcement behind the drivers head. The polycarbonate protection windscreen comes pre-printed which is always nice. It slides easily down over Leah’s head. The car is nicknamed “the Angry Bee” and it looks it with the mascot printed on the sticker.

The 1970 Dodge Challenger was released well before I was born. But it’s not hard to see that if you had this beast, you would absolutely be the envy of all your mates. She’s a beauty!
It’s fitting then, that the minifig is the king of cool as well.

The build of the chassis is quite simple, but the use of the microphone as the gear stick is a nice part usage. No doubt in real life, many would have changed the factory gear knobs to an 8 ball or something equally trendy.

The rear tail-light build techniques used to have it recessed under the boot lid were great. Similarly the front head lamps are also recessed and both light segments look fantastic.

There are a couple of stickers to add to the vehicle, but nothing too onerous. The side exhaust is also present, but this time with a muffler inbetween I presume. The bonnet also has a shaker or air intake which really adds to the tough 1970’s street racer look of the car. In contrast to many of the other Speed Champion series, the Dodge had steel hubcaps added rather than alloys, which suits the car well.

Even though we’re not into top fuel dragsters, the build is great fun and looks great on display. I touched on it above, but it really is looooonnngg. So much so that I needed to almost dedicate a whole shelf to it alone.

The 70’s Dodge also was a fun build and the deep purple looks amazing. It’s the perfect colour choice for this car. Both cars have a fair amount of swooshability and are fun for kids and adults to play with alike. If you love cars, then this is a fantastic set to get.