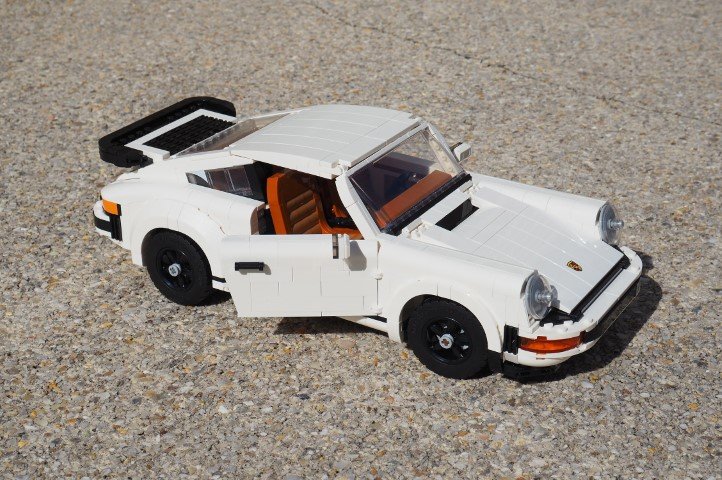 There are few cars as iconic as the Porsche 911. Originally introduced in 1964, the basic premise of a rear-mounted 6 cylinder engine, 2+2 seating and sheer automative beauty has remained throughout the last 57 years.

Earlier in my career I had an extremely generous boss who let me lease his 911 Carrerra Cabroliet for 6 months while he was travelling. It was automotive bliss. Even commuting to work was fun! Let’s see if the Porsche 911 model can bring the same joy.

The start of the build manual has 5 pages of information including quotes from the original designer of the actual 911 and the LEGO designer Mike Psiaki. It also shows a visual timeline since inception and it’s amazing to see both the changes over time yet a clear lineage. The build itself is a mix of LEGO and Technic parts with the chassis constructed from Technic to provide the stability for the bodywork.

As we start building the interior of the 911, it’s surprisingly complex. If you looked at the exterior of the model only, you’d almost certainly be surprised with the level of detail underneath the outer shell.

Another thing that strikes you immediately as the seats begin to take shape is the internal space. Whoever in marketing thought of the phrase 2+2 for this car deserves a huge raise! Maybe is should be a 2+ seater as it looks (and is) very uncomfortable for any lengthy trips for those in the back. As we start to shape the interior to get the iconic rear rake, the use of a new black 2 x 4 circle element makes an appearance. It will likely come in handy and for many future MOC’s.

Thankfully the rear bumper build includes a red Porsche logo pre-printed on the element. This is one set that where stickers not placed straight would be sacrilege! Once assembled the rear bumper looks fantastic and accurately represents the rear end of the 911. The air cooled engine was fun to build as there’s not too many cars that don’t run a radiator. This remained the case all the way until 1998. A good reason to keep the car moving at pace in real life!

The technique to build the front seats using the modified 1 x 4 log was a great choice. It is really close to the seats in real life which were heavily bolstered in this manner.

We then start building the steering rack. It’s always enjoyable when you can turn the steering wheel and the wheels really turn. It’s quite complex to make this occur in a LEGO model, but the instructions are clear and easy to follow. I must express my dissatisfaction with LEGO’s decision to print black manuals though. The high gloss really makes it challenging to read especially when building at night under artificial light. I really hope this is changed in future sets.

Building the front spoiler includes yet another new part for this set to create the orange indicators. Placing it horizontally allows 90′ wrap around indicators and it sets the tone for the entire front lighting. The headlights that we’ll get to later are iconic and look equally fantastic.

The doors utilise a similar technique to the seats and a mix of bricks and plates is used meet the height profile but also allow for door handles and the necessary curves. The windscreen is a pretty simple build. There’s something about the colour of the bricks representing the real leather on the dash that I really dig and it’s a great representation of the real vehicle.

At this part of the build, you can choose your own adventure – the hard top Turbo, or the open Targa version. Given my pasty white skin, I’ll go with the Turbo and it’s iconic rear duckbill spoiler. Throughout the build instructions there are also interesting notes about the 911. Choosing the turbo build actually has you adding components to the motor (the turbocharger) rather than simply changing the exterior. It’s a nice touch.

The designers have done a fantastic job on getting the curves right for the 911. The entire model looks spot on from the front lights, the curved bonnet and rake of the roof and all the way to the rear spoiler. It looks just like the real car.

Although we didn’t build the targa version, that version of the model allows you to store the roof under the bonnet. Remember it’s a rear-engine so all that space is free for your rooftop or a set of golf clubs. Just ensure you don’t take a friend golfing as the second set won’t likely fit. It’s a nice touch to ensure the removable roof can be stored here.

Building this set was really enjoyable. There’s a lot of variety and very little repetition. The techniques used were interesting and a lot of new parts were used to match the iconic beauty of the Porsche 911. For us, it’s now taking pride of the LEGO car “garage” until the next beauty comes along.

We highly recommend this set if you’re a car enthusiast or just a LEGO fan who enjoys great models. There’s not many cars that have had the lifespan of the Porsche 911 for good reason. It’s amazing in real life, and amazing as a LEGO model too!

We’ve bought from Zavvi in the past and often are asked what they are like given they are relatively new to the AU market. In our experience, customer service is excellent and pricing is competitive (and sometimes with ripper deals!). The main downside is that currently everything is shipped from the UK.

As impatient as I am, sometimes this can be a challenge, and moreso now with the local postal delays. But as the saying goes, absence makes the heart grow fonder. When it arrives, it’s all the more sweet! Over time this might change with AU shipping, for even better value but for now we’ve no hesitation in recommending them.