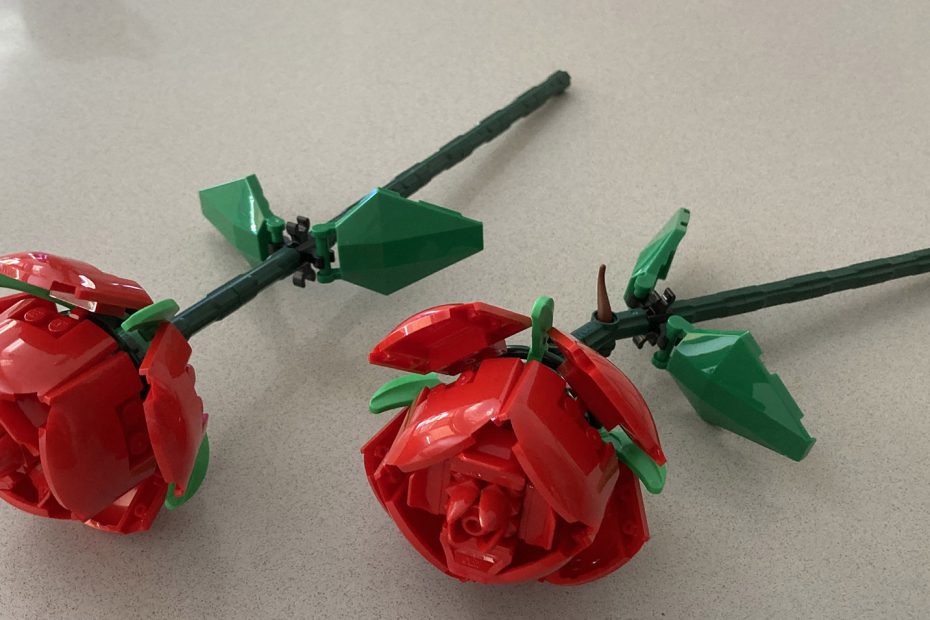 As I’m allergic to nearly all of Australia (grasses, pollen etc), Flowers are not a big thing in our house. So I was excited last year to pick up the Flower Bouquet set to build. It’s been sitting on our kitchen table for over a year now and regularly still gets comments on how good it looks. Often people don’t realise it’s LEGO on first glance, which makes it a nice surprise when they take a closer look.

When we saw the Tulip and Roses set released we thought it would be a great addition to the existing bouquet. Let’s start with the Tulips. It’s a quick little build of 111 pieces with three tulips; white, purple and yellow. Each tulip head only takes a couple of minutes to build with few round 2 x 2 plates supporting several 2×2 snot bricks and wrapped with the bonnet plates as petals. The use of the flower stem element for the flower’s filament and anther really fits nicely with the Tulip head.

The stem for each Tulip is similarly quick to build and made up of green technic elements along with a two leaves per stem.
Overall, these look pleasing and as a standalone set they represent Tulips nicely. Our only concern is that due to the stem length, they get a little lost in the larger bouquet if you wanted to combine the sets as we did. It can be easily fixed with some additional tube elements but it would have been nice to have slightly longer stems included in the pack.

Building the roses takes a slightly different approach. With the amount of elements that are also used in cars, it’s suprised they are not sponsored by Ford.

The base of each rose is made up of a double stacked Steering Wheel element to allow the petals to be attached in layers. It’s a great design as it allows the petals to fold on top of each other. The Pistil and inner petals are stacked on a 45′ offset to create an intricate central pattern.

As can be seen on the right, you could also leave off the second set of petals if you wanted the rose to look like a traditional dozen. I quite like this look, but once it starts flowering on the right it is quite striking. The bright green barbs in each corner set the petals perfectly.

The stems are similar to those found in the Tulips but this time using bright green windscreen elements. (Closer and closer to a car each element)

Once completed the roses look amazing and the firetruck red makes them pop. There are only 2 roses compared to the three tulips, but given the added detail, it’s great value.

Both of these sets are worth the price of admission. For us, they provide all the colour and beauty of real flowers and none of the sneezing and difficulty breathing! Can’t go past that. At $14.99 and $19.99 they are great value and could easily be used as standalone sets, particularly the Roses.

They also made a great addition to our normal bouqet. If you like quick but satisfying builds, these are a great buy.